In September or October or some month in the past I spontaneously took a trip down to Idaho with a former early-morning seminary student of mine (shout out, Spencer Transier) who was going there to forge his destiny and stuff.

I was going there because my parents had just moved into an assisted living facility. Which, in case you were wondering, really sucks.

The drive down was great–uneventful and nice and picturesque, like any good road trip should be. Here’s a poor picture from the drive: 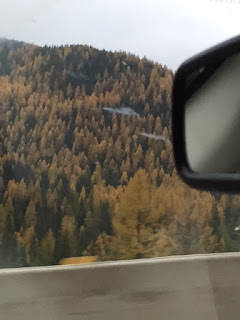 I’m always amazed I haven’t been tapped to work for a magazine with photos like this.

Oh, side story: at one point I was introducing Spencer to Radiohead (which I viewed as part of my responsibility as his former seminary teacher, obviously) and in order to give context to the brilliant progression of their musical output over time I was like “well, you know “Creep” right?” expecting him to know exactly what I was talking about. And he didn’t. So I sang the chorus. “Cuz I’m a creeeeep, I’m a weeeeeeirdoooooo . . .” Still nothing. Then I was like “Really Spencer? It was one of the most popular songs of 1995. How have you never heard this?” And he was like “Josh, I was born in 1995.”

And that’s when my soul died.

Guys, Spencer isn’t some junior high student. He is a returned missionary. He drives. He’s done years of college. He is old enough to drink. Maybe. I can’t remember. The new mission age thing throws me off. But the point here is that I might have never felt so old as I did in that moment. And for a man three gray hairs shy of officially being salt and pepper and three years shy of his 20 year high school reunion, that’s really saying something.

Anyway, we got there, and a bunch of stuff happened that I have trouble remembering because it all happened months ago, but I’ll try.

I walked around campus and visited the old haunts from when Lolly and I were there together. You know, last century. Literally. 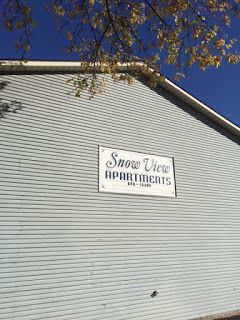 Lolly lived in this apartment. I ate dinner with her and her roommates almost every day my Freshman year. 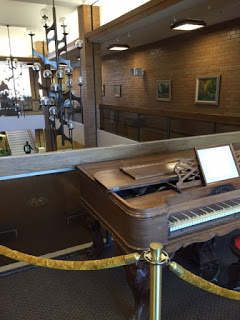 Here is the Snow Building (music), where I spent a lot of time my Freshman year. It looks the same as it did in 1999.

I spent a lot of time wandering the campus after a long run at the track. It felt so familiar and peaceful, and was really wonderful. Lots of good memories.
Later that day, we went to visit the assisted living facility where my parents are living. It was hard. The facility was nice though. 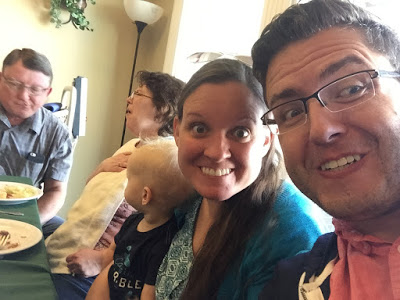 My sister Jenni and I during the dinner they served us at the assisted living facility. We are Klassy. 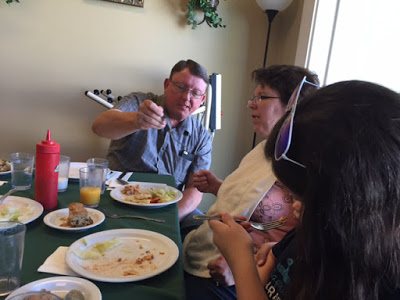 This picture of my dad feeding my mom breaks my heart and fills me with joy all at once.
After that we went to a park nearby to hang out with my dear friend Sarah Dunster. She and I have been writing friends for years, Skyping to workshop poetry and beta reading one another’s stuff, and when I told her I was visiting my parents in Rexburg at the assisted living facility she was like “Josh, that is next door to my house. I am looking at that assisted living center from my window.” I couldn’t believe it. It felt moving to me, and very synchronistic. I feel a lot of comfort knowing that she lives near them while I can’t. Anyway, she could only come to the park for a few minutes so I didn’t get a picture of her, but I did get some of the rest of us. 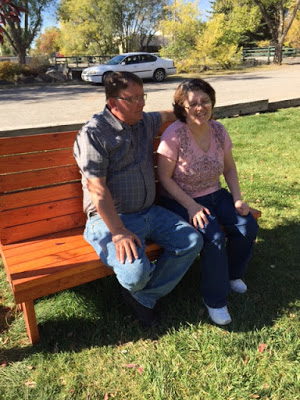 Mom and Dad on a bench.

It was such a beautiful day that Jenni and I decided to go walking through the park with the kids. The air was autumn-crisp. Her kids were chasing, playing tag. Jenni and I talked about life and about what was happening to our family. As we walked I saw some swings, and couldn’t help myself. I hopped on, and it felt so refreshing to fly through the air like a kid again. I couldn’t contain my childlike laughter as I soared higher and higher–it felt so freeing and wonderful, like I had accessed a part of me long forgotten. Jenni pulled out her camera and snapped some photos. “You’re gonna love these,” she said, and I was glad she thought of it. She sent them over to my phone and when I looked at them, I couldn’t stop laughing. I don’t know what I expected to see (something youthful? something carefree?) but it definitely wasn’t this: 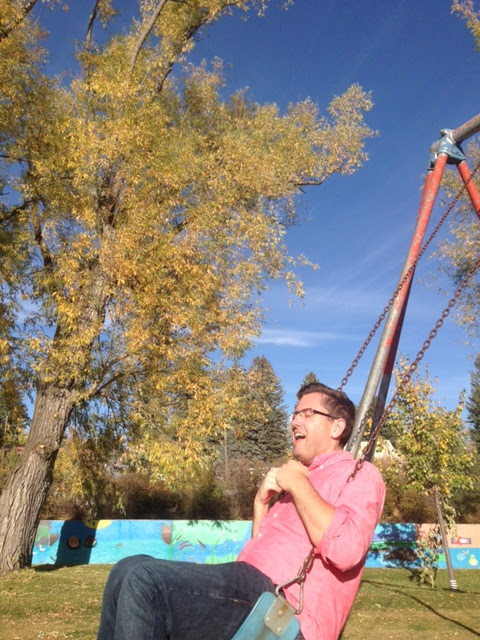 And/or I look like a disabled koala bear that’s about to sneeze.

One of those two things.

The rest of the shots were also hilariously awful: 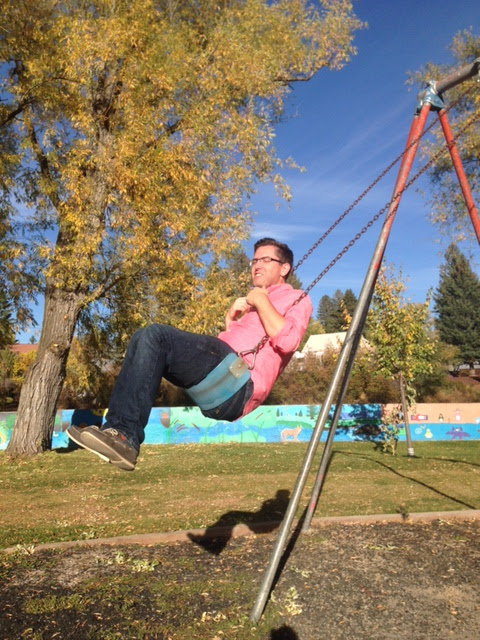 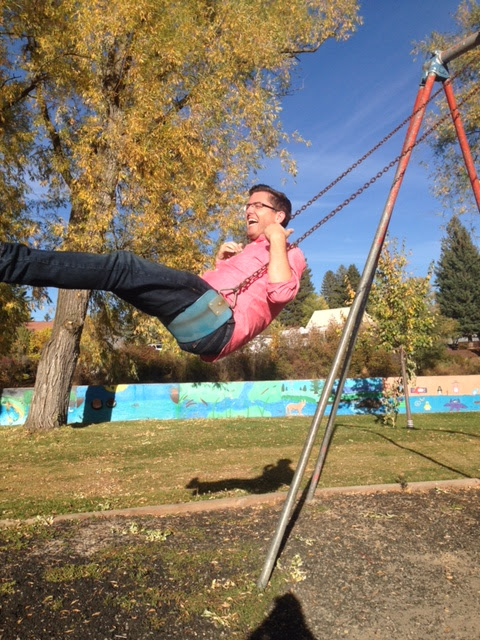 It’s tragic that such genuine, childlike laughter could look so awkward. 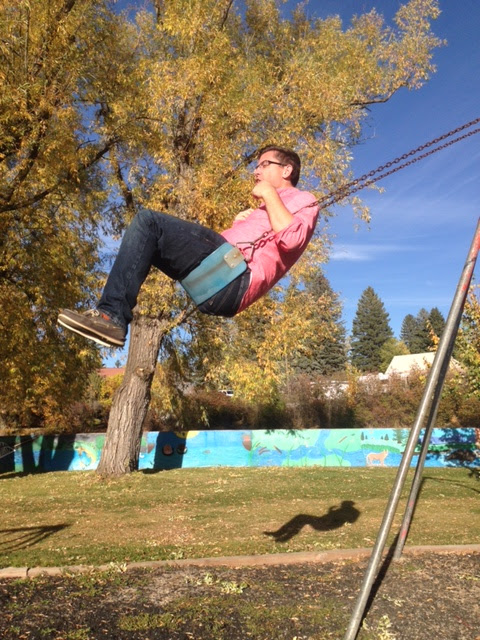 My favorite part of this one is the shadow–somehow that shadow so perfectly captures the ridiculousness of the giant man-child soaring through the air above it.
I don’t know why, but that moment of freedom and childlike wonder which I thought would be so beautifully captured on Jenni’s phone and then the way the actual pictures bitch-slapped back to reality was one of my favorite parts of the trip. Absurdity is fun, I guess. And humor helps to process pain. 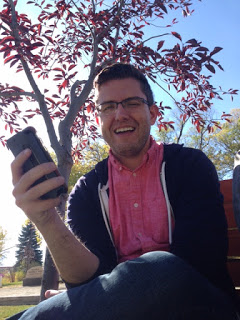 Here’s a picture of me looking relatively normal. To restore balance to the universe.
After this, we had dinner at a Mexican Restaurant. It was really difficult. My mom struggled the whole time. But it was very nice to be together.
I had some really healing, beautiful things happen this trip. It was wonderful to be with my parents. Going to church with my dad was soothing–the way his ward was already reaching out to him (in part because of Sarah’s advocacy in ward counsel before we got there) felt comforting. And then the last night I was there, my dad,  my brother Chris and I all had dinner together. We talked and laughed and ate really good food. It was cathartic.
The next morning Spencer came and picked me up, but before he did I was able to spend time with Chris. I talked to him and gave him a blessing, and it was really really clear to us both that he and my parents were supposed to be there (he lives in apartment close to them), and that even though it was hard, God had some important things planned for all of them.
I’m very glad I was able to make the trip.
I’m also really, really, really glad that I’m on Friday #2 of 2016 and I am on track of keeping my goal of writing a post every Friday.
Go me!!!!
2016–I will OWN YOU.

Oh, PS, an awesome Weeder named Wendy Simmerman posted this link on my Facebook page yesterday, and I realized I forgot to tell you all about something important. I won a thing!!!! A year ago!!! And now I waited so long to tell you that the contest is open again!!!! Because that’s how I roll!!! (If you click on the title it will take you to a PDF that I think is free, so you can read the actual piece. It was based on a blog post I wrote years ago, so it might sound a little familiar to some of you.)
(For the record, the plan is to write these things on Friday and post them on Monday–you know, when people are avoiding their horrible jobs all day more apt to have an online presence.)
All right. Finis.