“The Swan”–a tribute to the victims of the Orlando shooting

My mommy was laid to rest two weeks ago tomorrow.

I woke up to birdsong early on the morning of her funeral. The birds were so loud, they woke me up at dawn–way too early. I couldn’t get back to sleep. I felt sick to my stomach. Jenni, Chris
and I (the first three born) had eaten at Leatherby’s the night before–the very Leatherby’s where Mom used to take us as children, right near
where we grew up in Kearns. It was nostaglic and sweet and I’m glad I
have that memory.  That morning, though, everything felt cold and bleak
and my stomach felt unsettled. I took a shower. I put on my suit. I got
my violin. I looked over my notes for my talk. Then, by myself, I walked
over to the chapel where my mother’s body lay.

It was a horrible feeling, that solitary trek.

I got to the chapel and was shocked to see the hearse, and then individuals who had arrived early to the viewing to pay their respects. I didn’t know how to react and was dazed and numb and very morose. My accompanist, John Sargeant, saved me and pulled me into a quiet room with a piano so we could practice. Before
we started playing, John got out his camera and asked if he could record us.
My brain didn’t know how to process this. It felt odd and weird to
record myself feeling so somber–this horrible day, my mom a few rooms
down in a casket. He said that I might never want to use the footage which would be fine,
but that it would be good to capture it so that I could use it if I ever
did. My mind felt skeptical, yet at the same time, something in me knew
he was right. We recorded two takes. Only one worked because of the angle of the camera.

Today, I have realized I want to share that footage. I emailed John and told him to take his upload off of “private.” I want to share it so you can see this part of how I said goodbye to my sweet mom, certainly, but more importantly, sharing this footage is the only way I can think of to memorialize, in my own small way, those who died in Orlando.

Before I do, I need to explain why this song is significant to me. I explained this
in my talk at the funeral and I was crying so hard I could barely make
it through the explanation. “Le Cynge” (“The Swan”) is a piece by
Camille Saint-Saens, who is one of my favorite composers.  It was very significant to my mother’s family as it is one of the songs my grandfather used to play through the halls of their home as they all fell asleep at night. Even through all the years of her illness, my mom always recognized “The Swan,” and wept every time I performed it for her.

What I had never
realized until I was preparing to play this for her funeral is that this piece depicts a dying swan. It is the
“swan-song”–a representation of the legend that there is no sweeter
birdsong than the song of the swan, who has been mute all its life, as
it dies. This legend is, of course, inaccurate–swans do not sing a sad,
beautiful song as they die, nor are they mute–but the symbolism of the piece is so
powerful to me. It makes me think of my mom’s song as she died–those
ten terrible years, in which, as she left us, she communicated beauty,
grace, longsuffering, gratitude, and endless faith. The song of my
mother’s death is the most beautiful song I’ve ever heard. She was the swan of this piece–shuddering, flapping–eventually folding into death with
grace and beauty and tragedy. The last four notes of the piece felt like a message to me as I practiced and performed. In them, I heard the words “I’ll see you soon…” each time. It brought me peace.

The men and women who died in Orlando were swans. Their voices and struggles were, likely, largely unheard. Lolly served her Spanish speaking mission in Orlando, near the very place they died. She has still not brought herself to look at the list of names to see if she knew anyone who passed away, but even if she didn’t know them, she knew them, the Latino population of Orlando, and she loved them. She and I also deeply love our LBGTQIA+ brothers and sisters. This group is part of the great queer collective to which I belong. Because of this I know something of their muteness, or of the inability of some of them to share all of who they were in life. And it breaks my heart to know these beautiful lives were taken so early.

What I have noticed in the days since their murders is that, in death, each of them is singing a loud, beautiful song. I have been amazed at the voices of empathetic response from surprising corners–unlikely people who have heard this collective swan-song and had their hearts softened to the humanity that was lost. Their song is an anthem that people all over the world are finally hearing: that they lived, that they were real, that their journeys mattered, and most of all, that they should not have died for being, and celebrating, the beautiful people they were.

This rendition is my gift. I performed it on the very day my mother was buried. This footage is sacred to me. Yet this very personal monument of grief is the only fitting tribute I can make to those who died. It is a feeble offering, and I am no professional, but I hope the melody conveys the tragedy and beauty of the deaths of these beautiful swans, whose song will live on for years and years to come. And I hope that in those final four notes, you too hear the words “I’ll see you soon…” 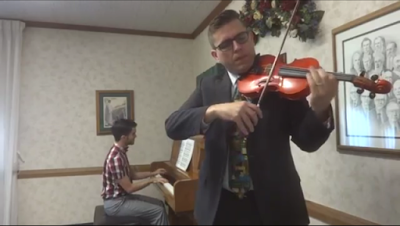