About four million years ago, we left a FFAQ poll dangling in the wind. It was a really fun one for me because in the instructions I asked people to do a silly thing in their comments, and it was interesting to see how many people picked up on it as they read the post. (Confession: I would probably have been the type of reader who missed it.)

Anyway, it’s time to pick up that thread, dontcha think?

Here was the winning question, posted by Wyochick:

Most typical marriages have some sort of boundaries in regards to the opposite sex (i.e. – in our household, we consider it inappropriate for one of us to go out alone with an opposite gendered friend). How do you handle this situation in your marriage…where its your same gender that you might be attracted to, but clearly need to have some dude friends?

This is a really interesting question. It’s probably a good question to explore.
One of the most frequent things people tell me as they process the fact that I am gay–like, really truly gay–is
how similar being gay is to other things. I don’t really understand where this impulse comes from. I’ll meet someone who has read my blog, and they’ll make a specific point in telling me something like “Having the challenge of same sex attraction is just like a lot of other challenges out there. It’s just like someone being addicted to alcohol, or somebody who is a kleptomaniac and can’t help but steal.” Sometimes they even take the comparison to “it’s even like a straight man who has a really high sex drive and is tempted to be unfaithful to their spouse with other women.” It usually ends with an explanation that “Sin is sin.”
While I do agree that all people face challenging things in life, I disagree with people who make this type of comparison. Homosexuality is more than just a temptation. It is so much different than an addiction–there are plenty of gay people who aren’t addicted to sex with their same gender. Homosexuality is way, way more complex than some vice. It isn’t a “temptation” the same way being heterosexual isn’t a “temptation.”

Let’s just keep it simple and talk about friendship for a moment in order to answer wyochick’s question. So, in many LDS households there is a rule like the one wyochich describes: neither partner ever spends time alone with a person of the opposite gender. No lunch dates. No meetings. No grabbing a “coffee.” No giving them rides.
There is wisdom behind this rule. It does a good job of eliminating a lot of scenarios that could potentially lead a person to become infatuated with someone other than their spouse. As a marriage therapist who sees lots of couples who experience infidelity, I can tell you that being unfaithful can originate from very innocuous-seeming places: giving sympathy to a co-worker, giving rides, friending that old junior high flame on Facebook, visiting that single sister in your ward so you can help her with her water-heater, etc. When emotional infidelity occurs (not to mention physical infidelity), it is extremely traumatizing and can be terribly difficult to repair. It is heart wrenching. Reducing the risk of this occurring, even if it breeds a few awkward “I don’t go out to lunch with female/male co-workers alone” type moments, is absolutely worth the trouble in my perception. So, as I go on with this post, please don’t think I’m dissing on a mutually agreed upon general rule like this if both partners feel good about it.
To answer the question though, think about it for a moment. As a gay man, where does this leave me?
Well, if I were to follow this ideal with exact precision, it would leave me very, very lonely. That’s where. As a married man, I couldn’t be friends with women and would have no female friends outside my marriage, and as a gay man, I couldn’t be friends with men and would thus have no male friends at all besides my father and brothers, none of whom live near me.

Thus I would remain friendless.

It’s not okay to be friendless. Human beings require deep, intimate relationships with others. A person’s spouse simply cannot meet all of a person’s friendship needs. Nor should they be required to try to.

So, obviously, this is not going to work in my situation.

Plus, let’s get even more specific, because we’re not just talking about friendship here.

I remember realizing one day how complicated this could become. When I was recently married and still in undergrad, I ended up studying for a final with another guy in my class. We reserved a room in the library, studied hard, and then stayed up late talking afterwards and had a good conversation. It was totally innocent and nothing untoward happened, but as I walked home, it suddenly occurred to me that if I were living to the letter of the ideal Wyochick refers to, what I had just done would have been suspect as a gay man married to a woman. And it hit me that it would have been equally suspect if I had studied alone with a woman. And then all the scenarios cascaded into my mind: to follow this rule exactly, I couldn’t be alone with another person except my wife, male or female, for the rest of my life. I couldn’t hold certain callings (like hometeacher) or if I had that calling, I couldn’t ride with my home teaching companion to visit our families. (Home teaching is a thing in the LDS church where pairs of men visit several families in a ward to ensure their well-being and deliver a spiritual message.) I couldn’t be at a presidency meeting if there were only two of us there. I couldn’t get a ride to a meeting from a man or a woman. I couldn’t do a lot of things that many other people wouldn’t think twice about.
Eventually I realized that this just didn’t make sense. This is simply untenable. Much as one doesn’t want to think of himself as the “exception” to a rule, I had to face my reality: I am an exception to this rule.
I think the result has been unexpectedly positive.
What I have had to do instead of relying on specific cultural boundaries about my interactions with the opposite sex and/or the same sex is that I have to be very thoughtful and conscientious in my interactions with everyone. I highly recommend this. I approach every interaction with a man or woman with a high level of self awareness and honesty. I have to be aware of my thoughts and feelings, as well as the potential thoughts and feelings of others, at all times. And I have to be open with Lolly about everyone I interact with.

This sounds, perhaps, like a lot of trouble, but I assure you that it has been very rewarding. Being open with Lolly about all of my friendships and relationships with others allows me to be the kind of transparent, vigilant, self-aware person I strive to be. Whereas, when a person is only relying on a strict rule-set to keep him or herself protected against feelings that would be problematic, but isn’t used to being self-aware and open with spouse (and self) about what they are actually feeling, the risk for infidelity is higher than in a case like mine. (This isn’t to say that I advocate anybody changing the boundaries they have set. More that I think that people should avoid using such boundaries as a protective crutch that allows them to “check-out” of their actual emotions and awareness of self. Adding a level of self-awareness and deep communication with spouse, as well as adding the ability to recognize exceptions that really qualify as exceptions, is taking this principle to a higher level in my opinion.)

For me, it’s so much more complicated than that. Consider the potential risks in any of the following scenarios:

I’ve recently realized that my lesbian friends can be some of the more rewarding friendships I have because it is the only relationship I can have with another person where there is no risk for sexual attraction on either end. There is such a peace to that–such a lack of pressure, and a calmness. It feels amazing to relate to someone with a complete absence of sexual risk on either end. It’s difficult to describe unless you rarely experience it. (Most people experience it so often they probably would never notice it at all, and might find what I’m saying here to be rather strange.) It’s probably, in that way, the relationship the most resembles the chill, pressure-free type of interactions straight people have with their other straight friends. Just a guy being one of the guys. Just a guy being with other guys with no sexuality-based subtext of any kind*. 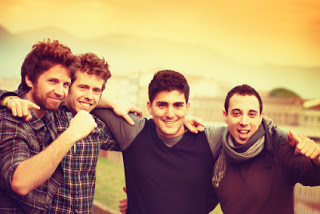 I will never know what that feels like. And there is loss there. And sometimes sadness because I would really, really like to experience that sometime. (And that is one of hundreds of reasons why being gay is so much more than being addicted to painkillers or really liking to eat cake.)

But it’s okay, because I have been blessed with some of the greatest friends (of all the above categories) a person could ever ask for, and that is what life is about–deep, meaningful, genuine, authentic relationships with people you care about. My life is richly blessed in this department. I cannot complain.

*Important note: I don’t want people to assume that I am saying that I’m attracted to all guys I interact with. Of course this is not the case. Nor is it the case with any person who has sexual attractions towards any gender. This is really hard for me to explain, but let me ask you to picture the following scenario. Think of a relationship you have had with someone of the opposite gender (if you are straight) where neither of you felt attracted to each other. No matter how unappealing you might find each other at any given moment, the potential still exists for the relationship to become romanticized by one or both of you because of your orientation. This is what I mean by a sexuality-based subtext. There is a basic possibility of attraction that is always looming and ever-present which, in subtle ways, impacts the relationship.

I hope this post answered your question Wyochick. It was a really good one. Thanks for asking it.