So you know the “facts about me” fad spreading like wildfire over Facebook? Well, I kinda accidentally liked two statuses, and am now required to post 19 facts. As I was about to do so, I was like “waaaait a minute this has to be my next blog post, because what a fun idea for a blog post, right?” (Also, I can’t follow rules and will assign nobody a number. Unless you beg. In which case your number is 5.)

So, here you have it. 19 random facts about Josh Weed.
1. I lost my retainer about one year after getting my braces off but all these years later my teeth have remained straight. (It’s about the only thing about me that is.)
2. My biggest pet peeve is when someone talks during shows or movies.
3. Wait no. That’s my second biggest pet peeve. My biggest pet peeve is any kind of spoiler whatsoever about any work of art in existence. I am so neurotic about this that Lolly makes it a point to mock me on a regular basis. I seriously want to know nothing. NOTHING. Even if it’s an irrelevant detail. The fact that so and so wears black to a party later that season lets me know that so and so went to a party later that season. And is still alive. And maybe likes parties now. And still sometimes wears black. And then somehow my mind is able to use that seemingly irrelevant detail to figure out a major plot detail like that she now has cancer and then everything is RUINED. (It’s possible that I’m a liiiiiiittle bit weird about this. Perhaps.)
4. I hate shopping of any kind. Especially grocery shopping. But also clothes shopping. Malls are anathema. The only exception to this is bookstores, where whenever I enter I immediately wish I had brought a tent I could set up and live in for the rest of my life.
5. I rarely finish books. I start lots and lots and lots and lots of books, but if it doesn’t grab me and get me to the end right away, it’s destined to be quit about halfway through. But that doesn’t stop me from liking the book. (Two side stories: 1. I wrote the main essay in the AP English exam on a book I had only gotten about 1/3rd of the way through. 2. One of my favorite books ever is Tess of the D’urbervilles. I have read it twice until the last twenty pages and then stopped without reading those last 20 pages. I can’t even explain why. I know there’s  a *spoiler alert!!!!!* Stonehenge scene, but I’m still unclear about what happens there. But it’s still one of my favorite books.) Some people say they have the problem where they can’t stop reading books they hate. I have the opposite problem where sometimes I can’t finish books I love.
6. My grandpa crafted the violin I play on. It’s a replica of Stradivarius’ Messie.

Here’s a couple of pictures: 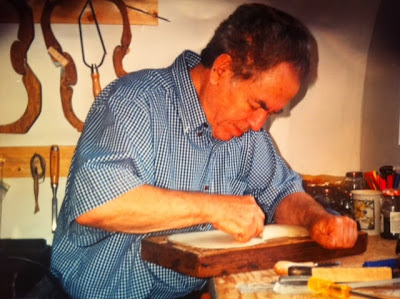 Grandpa Mousley, working in his shop in the garage 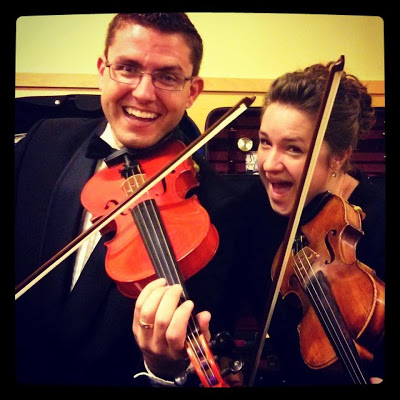 And here’s the finished product.
This is a picture of me and my friend Jenni Warner before our recent orchestra performance at Benaroya Hall. We’ll be playing there again on Christmas Eve. You should totally come. I’m serious.
7. I’m genetically half Swedish. My dad is second generation American on both sides.
Related: The last name Weed used to be either Anderson or Erickson in Sweden (can’t remember which) and then it was changed in some war or something to Weed. I have no idea why or what that means in Swedish, but I love my last name.
8. The last names of some of my great-grandparents: Mousley (formerly Yaeger or Jaeger), Whatcott, Tenney, Payne, Weed, Thunnel. If you are a relative or a possible relative comment and let’s figure it out! I love connections like that. You will make my day.
9. I write poetry.
10. I was thrown in jail at the end of my mission and they wouldn’t let me go home. I was kept in the country (Venezuela) for an extra month even though I was only in jail overnight. You can read about that here.
11. I have a mild case of social phobia. It comes and goes. Sometimes I’m totally fine and normal in social situations. Other times it randomly strikes and I turn all red and get awkward and want to throw up or go hide in my car because PEOPLE! TERRIFYING!!!! and Lolly has to be like “SHHHH” and put her finger to my mouth and tell me to take deep breaths. Social phobia runs in my family really, really bad and I got a pretty mild case comparably, but it still kinda sucks. (One on one, though, is never a problem which is part of why I love being a therapist so much.)
Related: when I’m talking to people (esp. groups of people), I often have trouble believing that they are interested in or are even listening to whatever story I’m telling. It feels like my words fall onto the floor as they exit my mouth. Conversely, I feel unusually comfortable with the written word. Like my words are taking on a life of their own as I put them on paper.
12. As a college freshman there were a couple of weeks where I contemplated majoring in physics, mostly because I felt like studying English was a cop-out because it came more naturally to me. (And then I remembered: math.)

Related: I did not take one single college course that did not count for my generals, my major, my two minors, or my pre-reqs. Sometimes in life my focus is very willy nilly, impetuous, and random. Other times my focus is razor sharp, patient, and very precise. Usually the pattern is that the willy nilly is for short term small scale stuff, and the razor sharp/patient is long term, large scale stuff.
13. I sing in the shower. Really, really, really loud. Like terrify-the-children loud.
14. When I was in junior high I used to spend a lot of time reading John Grisham and Michael Crichton novels with Shostakovich’s 5th symphony playing on my dad’s old tape deck as a “soundtrack.” (Listen to about 60 seconds or so from where I linked and you should see why. In fact, do yourself a huge favor and listen to the entire first movement so you can hear it all in context sometime. You won’t soon forget it.)
15. I eat sweetened condensed milk from the can. Do not knock this till you try it. Fo realz.
16. Growing up I wanted to be a writer and a therapist. Go fig.
17. I often feel like my internal persona swings on a pendulum between being comical to the point of near absurdity and serious to the point of being almost-but-not-quite grim. I think this blog kind of reflects that.
18. I’ve never been in a car accident or broken a bone. I like to knock on wood after admitting this because I feel the two could so easily go hand in hand.
19. I have a really cheesy, religious sense of the cosmos. I see synchronicity everywhere, and find the number of uncanny coincidences in my life to be highly unlikely given the unfathomable number of possible outcomes the universe contains if left to its own devices.
All right. That was interesting and kind of fun. And now it’s 1:00am and I need to go to bed.
But first, I don’t know how to say this without just saying it: the response I got on my last post was by far one of the most healing things this blog has yielded for me, and it’s yielded a lot of healing things. I’ve written this paragraph about 20 times (in different, unfinished and unsalvageable posts) trying to express this, and I never feel like I can, but I have to try. Having so many of you cry for that little 12-year-old version of myself was so profoundly moving to me. It’s as if that hurt version of myself really needed to experience such deep sympathy/empathy and commiseration and comfort. I truly felt like people–adults–came and put their arm around that young kid’s shoulder–because he’s still inside me, that hurt young man–and said “this is not okay. What’s happening is not okay. It’s not your fault. You don’t deserve it. You didn’t deserve to be treated that way” and somehow that part of me really heard it–really felt that comfort and empathy. And it was the first time that ever really happened, because I’ve never really shared with anybody in so much detail how hard that time-period was, even as it was happening. Nobody really knew. I just suffered in isolation and then never really talked about it in great detail again, even all these years later.
So, thank you for that. It meant more than I can express.
Have a good Sunday, everybody.